Before the show began, the woman next to me (a British schoolteacher) leaned over and said, “We came because we heard it was controversial.” Her husband smiled dutifully.

Rupert Goold’s Merchant of Venice is set in a raucous Las Vegas, complete with card tables, bad suits, and gaudy lights. Launcelot Gobbo (Jamie Beamish) opens the show as an Elvis impersonator, complete with song and, uh-huh!, dance. Antonio (Scott Handy) and Bassanio (Richard Riddell) are what you’d expect: the one a glum businessman, the other a polished youth with just enough hair gel to suggest rakishness. It’s clear that Antonio loves Bassanio, and clear that Antonio is dismayed by Bassanio’s plans to gamble on a marriage with Portia (Susannah Fielding). Standard Merchant fare, plus Las Vegas.

Portia and Nerissa (Emily Plumtree), however, are anything but typical. The game of the three caskets is transformed into a game show, Destiny, hidden in the basement of one of Las Vegas’s buildings. Contestants appear in trumped up, false personas: Morocco the boxer, Arragon the matador, Bassanio as Hercules himself. Portia and Nerissa are also layers of ornament: while their actual accents are Southern (and thickly ridiculous), they put on the airs of dumb blondes during the show, which is projected on TV screens above the stage. I his climactic choice of the lead casket, Bassanio rails against ornament: his choice shuts down the show, and Portia reveals self-consciously strips away her own ornaments: the accent, the platform shoes, the blonde wig, even the false confidence. She’s still daddy’s little girl, even after his death.

I haven’t mentioned Patrick Stewart’s Shylock yet. Stewart reprises this role by emphasizing Shylock’s jewishness, blessing his daughter in Hebrew, contrasting his cool, businessman’s exterior with his reactionary religious intolerance, even wearing a kippah and a tallit during the courtroom scene, which is held in some dark, sanitized torture room of a prison. He is Patrick Stewart (with a full head of hair!) and both his intensity and his emotional control are astounding.

The prison scene, however, is where Stewart and Handy really shine. Merchant is a play of subtext: Antonio’s love for Bassanio, Portia’s desire to master Bassanio’s will, Shylock’s balance between humanity and stereotype. In this production, all the subtext becomes embodied during this scene, speaking out through gestures and glances rather than words. When Bassanio arrives, Antonio has been stripped to the waist in preparation for the knife: the two men embrace, and Bassanio grips Antonio’s flesh like a lover. Portia comes not because she wants to save Bassanio’s friend but because she intuits the nature of Antonio and Bassanio’s relationship: she comes to observe, and saving Antonio is merely improvisation. Shylock holds the knife to Antonio’s breast, and Antonio quakes with such fear that Shylock complains to the police officer holding him still: it is only later in the scene, when Shylock puts a gun to Antonio’s head and Antonio does not flinch, that Shylock can say, happily, “I am content.”

Everyone gets what they want in this scene, and it destroys them. Shylock makes Antonio fear death and ultimately face it, becoming the monster Antonio so reviled and feared: Shylock’s only way to touch him; Antonio faces death for Bassanio’s sake, testifying to his love, but Portia trumps that testimony by saving him, saving her husband’s lover. And Portia sees what she came to see. The play does not end with jokes and happy reunions. It ends with the unadorned truth, the bare lead that Bassanio hazarded for. Everything is out: Antonio’s love, Gratiano’s pettiness, Jessica’s self-hatred, Portia’s self-fabrications. Life unadorned: it’s a controversial thing. 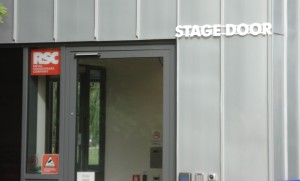 Imagine that you’re a soldier in the sixteenth century. You’re at the edges of a battlefield, caked in the blood of your enemies. You make your way through a abandoned, desecrated church: the stained glass windows are smashed to bits, the statues are reduced to rubble, and the faces of the murals are fall scratched out. This is what the Protestants think of iconography. Above you, you see the bodies of three dead children, hanging from meat hooks. Their foreheads are marked with ashen crosses. You wonder, who killed these little angels? Who put them here?

And then they open their eyes and speak your name.

So opens Michael Boyd’s RSC production of Macbeth. Read on, if you dare. But beware: as Doctor River Song says, “Spoilers!”

I tell this tale vilely. I should first tell you how a wounded man stands alone on the thrust stage of the newly refurbished Royal Shakespeare Theatre, and a priest calls out to him from among the audience: “Doubtful it stood. Doubtful it stood.”. The messenger takes up the words and begins the Soldier’s speech to King Duncan, who appears out of the mists. The soldier, we soon learn, is Malcolm, the King’s son. The priest is Ross.

Boyd sets his production against the historical backdrop of iconoclasm, the 16th century Protest purge of Catholic and Anglican religious imagery: statues, murals, stained glass windows, and representation of God, Christ, or saints. The imagery seems clear: faces, false and true; the sacred torn down; the ghosts and ruins of the past. And even if one might miss the historical nuances here, the program includes several short articles to bring every spectator up to speed. The production itself employs standard Renaissance costuming: leather cloaks, riding boots, rapiers. We find ourselves more in Shakespeare’s England than in the Scotland of yore.

At first glance, this play is standard fare: Macbeth (Jonathan Slinger) is ambitious, rash, and potent; Lady Macbeth (Aislin McGuckin) is strong-willed, seductive, and finally self-destructive; their performances are top-notch RSC fare, as with the rest of the cast. But the witches! Here the magic begins. Macbeth’s first encounter with the three weird children is short: no “toil and trouble,” no talk of familiars or magic, only ominous prophecies and the eerie laughter of children in the dark. Thus far, any type of witch might do: wise, undead children are a particularly frightening branch of the supernatural, but other dire figures might suffice. The Porter, too, seems standard fare: dressed in red, bearing fireworks, and merging with the minor character Seyton (pronounced Satan), this man is more Devil than Porter. A not uncommon choice. Macbeth kills Duncan, Macbeth becomes King (ordained with water and crowned by Ross), Macbeth orders Banquo’s murder. All is well.

Then. Seyton is the third murderer. He stands back as the others kill Banquo. When the two murderers leave, Seyton gestures and Banquo rises, leaving with him. At the banquet, Macbeth imagines that Banquo’s corpse kills him, slitting his throat. I fear of actual harm from Macduff, Macbeth meets with the weird children again. Hecate and the spells are gone: the children merely step onstage holding dolls, which they use to deliver their prophecies. Macbeth is emboldened and the children leave. Again, quite eerie, but these choices are in line with many productions.

Then. Macduff’s house. Lady Macduff argues with Ross about her husband’s departure. Her children enter. They are the weird children, quite alive, and carrying the dolls of the previous scene. Ross leaves, the murderers enter, killing all. Ross returns as witness (remember). Then Seyton arrives and Lady Macduff and her children arise, following him. When Malcolm besieges Macbeth’s castle, the dead are there, wielding swords and carrying branches, Ross among them. When Macduff fights Macbeth, the dead are there, haunting his steps. Macduff’s daughter steps between them during the fight: Macbeth sees her and starts; Macduff kills him, and then sees the ghost of his wife. Malcolm enters and Macduff proclaims him king. Malcolm is silent. Then Ross speaks from the balcony as he did at the play’s opening, prompting the new king’s words. Malcolm speaks, overwhelmed by his new duties, but standing firm. The dead pass on. Seyton opens a door, and Macbeth rises, stepping into darkness.

I’m not entirely sure how to read this production, this twist of the witches into the weird children. At the play’s end I believed that Ross is a priest of the old order, of the defaced saints and demolished altars. Somehow, he speaks for the dead, putting word in Malcolm’s mouth, and the lets the dead speak for themselves. The weird children are not evil: they are the innocent seeking vengeance, the dead reaching out to create kings and destroy them. It is an uplifting vision: the hope that if someone will speak for the dead (priests, playwrights, even playgoers) then the voices of the dead will effect political change. Macbeth’s “tale told by an idiot” is just that: the voice of a madman divorced from his humanity, the sound a tyrant makes when he falls. The children prophesy a different kind of life. In a world of political unrest, of internet protests and grassroots revolutions, the voices of the dead can have great power, and might bring great hope.

But who hanged the children in the first place? King Duncan’s men? If so, Macbeth avenges them, and they only turn on him once he chooses to murder Banquo. Characters in the play declare that Duncan was a good thing (historically unlikely, but Shakespeare seems to alter that). Why does Cawdor rebel before the start of the play, Cawdor who knows how to die honourably? Are rebels false men, or are they equivocators who know how to harness language to fight power and tyranny?

I don’t know that the play (or the production) offers any final answers. But Boyd’s directorial vision, alongside Slinger’s fully flourished performance of Macbeth (empty and soulless at the top of the world, a man reduced to the thirst for mastery), these things have reopened Macbeth for me, a play that I thought I had mastered: who speaks for the dead?