It’s a busy semester, so Improbable Fictions is concentrating its efforts on two performances this spring.

First off, we’ll be presenting a collection of scenes of and about teaching in early modern drama as part of the 2020 Hudson Strode symposium “The Future of Teaching Shakespeare.” Registration is closed for the symposium (we capped out at seventy attendees!), but our performance is free and open to the public. We’ll be reading these scenes at 7:30 pm on Friday, February 21st, 2020 at the Dinah Washington Cultural Arts Center. Pre-show music begins at 7:15 pm, and a Q&A will follow the approximately 50 minute performance.

Second, IF will present a staged reading of Shakespeare’s Richard III, cut and directed by Angeline Morris, at 6:30 pm on Wed, Mar 4th, 2020, also at the Dinah Washington Cultural Arts Center. Pre-show music begins at 6:00 pm. We’re partnering with Theatre Tuscaloosa’s SecondStage: Festival of One Acts, a collection of short plays that begins at 8:00 pm on March 4th and runs through the rest of the week. IF’s reading is free and open to the public. Tickets for the Festival can be purchased here.

It’s that time of year when various actors’ fancies turn to Shakespeare. And the Rude Mechanicals is about to open its 17th season.

Our first show is very contemporary drama-comedy about power, corruption, and sexual assault, Measure for Measure, late comedy-drama of Shakespeare’s. Set in Vienna the story concerns the ruler of the city going on a vacation and putting the power of the law into the hands of Angelo, her assistant. Under the Duchess the city’s laws, especially concerning sexual activities, have not been enforced and Angelo is determined to right this wrong. However when he condemns a young man to die for impregnating his fiancée, his sister, Isabella, a novitiate at the convent, pleads with Angelo to show mercy to her brother, and Angelo gives her the price for that mercy: to give up her body in sin to Angelo. Very serious issues are brought forth, intermingled with Shakespeare’s comic fools, and his supreme language.

We will present Measure for Measure Wednesday-Saturday, May 29-June 1 down at the Park at Manderson Landing, lower level. Music begins at 7:30 and the play begins at 8pm. I have attached our poster. As before, it is FREE.

Then next month, Wednesday-Saturday June 26-29, we will bring you The Comedy of Errors, Shakespeare’s early (possibly earliest) very silly and quite dizzying laugh out loud comedy of two sets of twins on a collision course, based on an earlier comedy by the Roman, Plautus.  Same times and information.

We look forward to seeing all of you in the park (Or the Allen Bales Theatre if bad weather forces us indoors).

On April 3, 7:30 pm, at the Dinah Washington Cultural Arts Center (620 Greensboro Ave, Tuscaloosa), Improbable Fictions will stage a selection of readings around the theme of strangers. Pre-show music begins at 7:00 pm. As always, IF events are free and open to the public.

Our inspiration piece for this event is Shakespeare’s monologue about immigration and empathy from the many-authored play Sir Thomas More. The play has gained a lot of attention in recent years, thanks in part to Sir Ian Mckellen, and we wanted to place this powerful passage in its early modern context, staging it alongside excerpts from Antony and Cleopatra, The Merchant of Venice, Midsummer Night’s Dream, Othello, The Tempest, and Titus Andronicus, as well as selections from medieval folklore, Mandeville,  and Brecht. Our hope is to start a conversation about what it means to be treated as a stranger in a strange land both then and now, and UA’s own Dr. Cordelia Ross will kick off a post-show Q&A with some thoughts from her own research on the subject.

We’re still gathering together readers for this event, so if you’re interested in taking part in an IF production, shoot me an email at nrhelms@ua.edu, or reach out to me on Twitter @nrhelms.

As always, IF productions are sponsored by the Hudson Strode Program in Renaissance Studies, part of The University of Alabama Dept. of English.

The Strode Program is very excited to be sponsoring the Resurgens Theatre Company’s touring performance of The Changeling on Tuesday, February 26, 7:30PM, in the Allen Bales Theater here on campus.

For those of you unfamiliar with it, The Changeling is a fantastically dark, yet timely revenge tragedy that powerfully explores issues of sexual desire, betrayal, and madness.  This is a wonderful opportunity to see a professional production of a rarely performed masterpiece of the Jacobean stage right here on campus—don’t miss it!

Tickets for this event are *free* but must be reserved online through this link:  https://thechangeling2019.brownpapertickets.com

Please also feel free to spread the word to anyone who might be interested in the show!

We have an exciting slate of Strode-sponsored programs coming up this spring, compiled by program director and Hudson Strode Professor Michelle Dowd– please take note of these events and mark your calendars accordingly!   Thanks to the abundance of early modern performances and films on offer this semester, Improbable Fictions is temporarily shifting focus away from Shakespeare and toward less bardolized early modern playwrights: Margaret Cavendish, John Lyly, and Margherita Costa.
Sponsored Performances:
We are sponsoring three fantastic performances this spring in conjunction with EN667, The Shakespeare in Performance Practicum.  All three events are free and open to all members of the UA community.  A poster for the ASC shows is attached.  More details to follow! 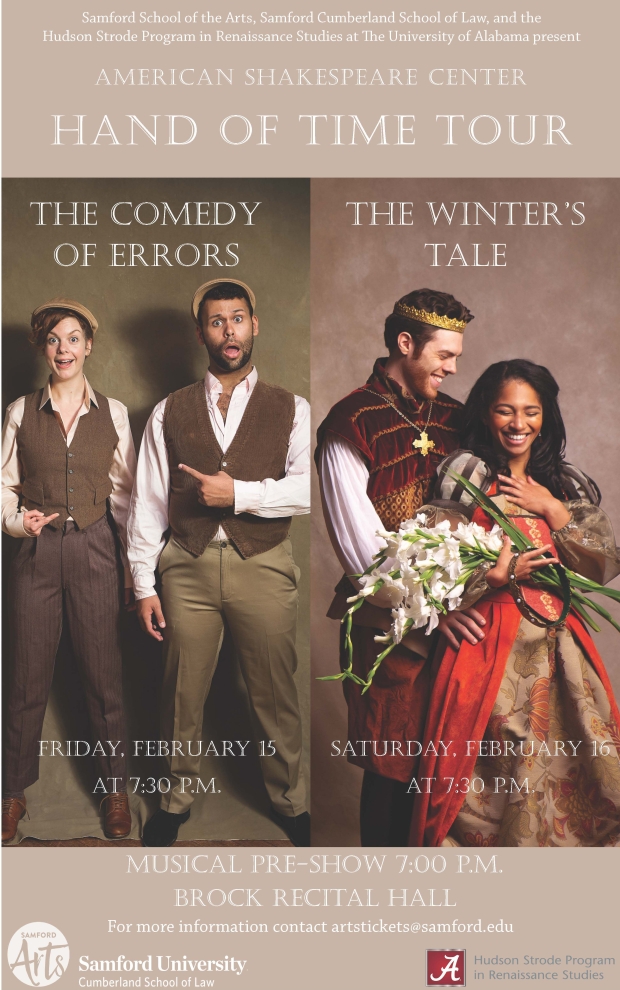 Guest Speakers:
We are excited to welcome the following guest speakers this spring.  All events are free and open to the public:
Strode Film Series:
Please also check out the Strode Film Series schedule for the spring.  Note that some events will be held at the Bama theater, and others will be held on campus.  All shows are free and open to the public.  For more information, please visit the Film Series’ website: http://shakespearefilmseries.ua.edu/
Improbable Fictions:
Improbable Fictions is hosting several events this spring. The first three are for small groups and thus aren’t appropriate as a broad extra credit opportunity for students, but the last performance will be perfect for 200 level English courses and the like. If you’d like to participate or just come listen to the first three, please RSVP.
We’ve still got room for participants for all shows, so feel free to reach out to Nic Helms (nrhelms@ua.edu) or any of our directors if you’re interested!
Please mark your calendars for these events, and stay tuned for additional announcements and updates!!!

Last week’s Medieval Medley was a delight! We packed out Gorgas 205 with an audience of nearly eighty. I can’t decide whether my favorite moment was Steve Burch spouting ‘LATIN!’ or Mark Cobb making out with pots and pans. If you missed the event (or would like to relive it), check out the media below: the program, production photos, and audio from the event. (Listen with care: the audio quality is not the best.) 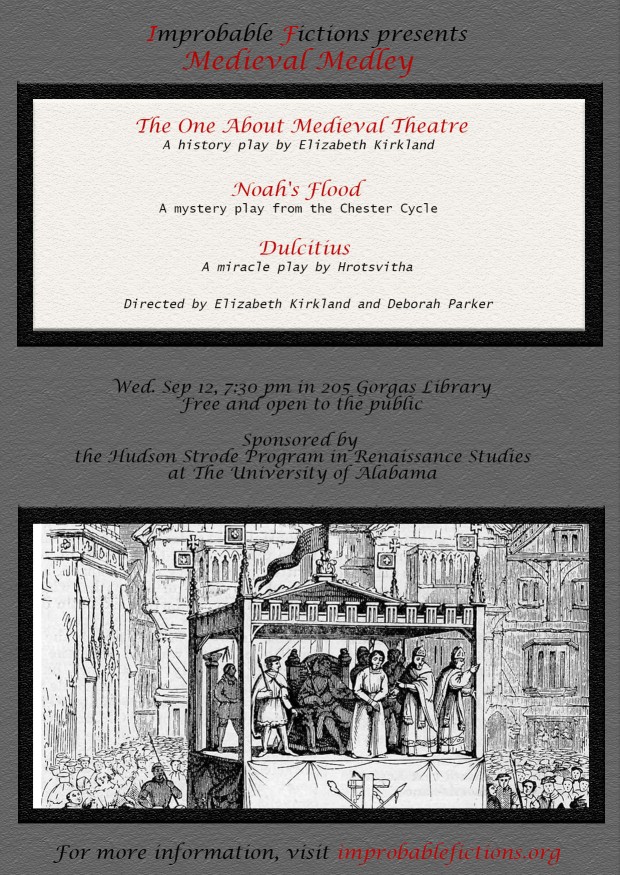 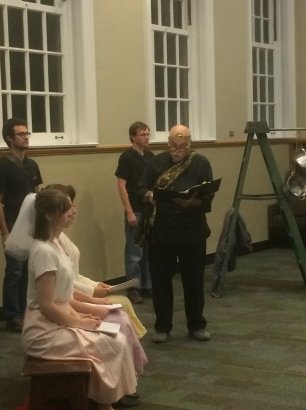 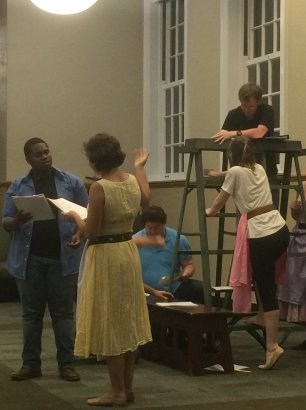 · Wednesday, Sep 12, 7:30 pm, Medieval Medley, a staged reading of several Medieval plays, including works from Hrotsvitha and the Chester Cycle, at 205 Gorgas Library

· Friday, November 2, 5:00 pm, Improbable Fictions will present an array of American Literature readings as part of First Friday Art Walk in Downtown Tuscaloosa and the Southern Literary Trail’s Exhibit of the Steve Soboroff Typewriter Collection. On display will be George Bernard Shaw’s typewriter along with others used by Truman Capote, Tennessee Williams, Ernest Hemingway, Gore Vidal, Ray Bradbury, Tom Hanks, Maya Angelou, and John Lennon. The readings and exhibit will be at the Tuscaloosa Cultural Arts Center (http://cac.tuscarts.org/contactus.php).

The spring rushes on apace, and Improbable Fictions has two Shakespeare-adjacent offerings for you in April:

First, on Saturday, April 7th at 1:00 pm, Improbable Fictions will present a staged reading of “The Resurrection Play” from the medieval York Cycle of plays. Directed by Nic Helms, dramaturged by Cordelia Ross, and hosted by First Christian Church of Tuscaloosa. This short play will be performed with commentary by Cordelia Ross and Reverend Tim Trussell-Smith.

Second, on Thursday, April 19th at 7:30 pm, at the Dinah Washington Cultural Arts Center, Improbable Fictions will present a staged reading of Edward Bond’s Bingo (Scenes of Money and Death), a 1973 play about Shakespeare’s final years: retired in Stratford, unable to connect with his family and community, burned out by the inhumanity he witnessed daily in London and now back home, Shakespeare ponders his past and present, only to keep asking, “Was anything done?” Written by the acclaimed playwright Edward Bond (Saved, The Sea, Lear), this is a remarkably insightful look at our greatest writer. Directed by Steve Burch.

Both events are free and open to the public. Sponsored by the Hudson Strode Program in Renaissance Studies.

On Monday, Oct 9th at 7:30pm, Improbable Fictions will present a staged reading of John Milton’s Samson Agonistes. The reading will be held in 301 Morgan Hall on UA’s campus. Free and open to the public. Seating is limited: first come, first seated!

If you’re interested, you can find our cut of Milton’s closet drama here:

If you missed our staged reading on Sep 21, fear not! You can find the audio from the event here:

Apologies for the background noise at the start. It dies down once the performance begins. 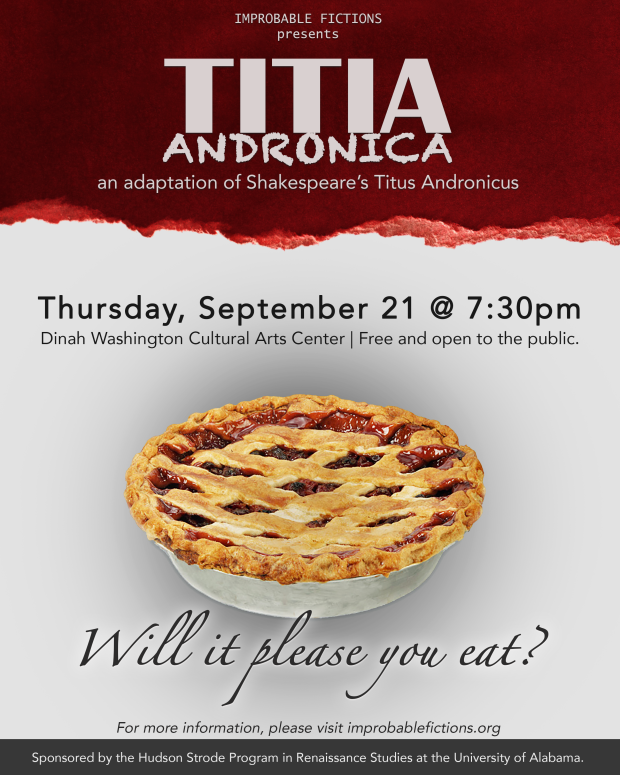 On Thursday, Sep 21 at 7:30pm, at the Dinah Washington Cultural Arts Center, Improbable Fictions will present a staged reading of Titia Andronica, an adaptation of Shakespeare’s Titus Andronicus. Adapted and directed by Erin Hildebrand and Courtney Parker.

Free and open to the public. Sponsored by the Hudson Strode Program in Renaissance Studies at the University of Alabama (english.ua.edu/grad/strode).