As always, IF is sponsored by the Hudson Strode Program in Renaissance Studies, UA Dept. of English. Stay tuned for further details! 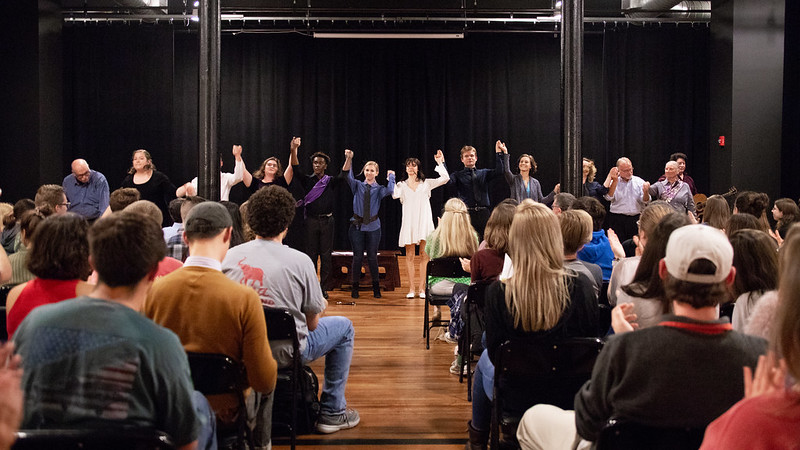 Our staged reading of Othello was a smashing success attended by a packed house of over 125 people. You can find pictures here, courtesy of UA’s College of Arts and Sciences. I’d also like to share with you the program from the event (Othello_playbill) and an audio recording of the reading:

[The play begins at about the 6 minute mark. The audio quality is improved this time around, though beware: applause and the guitar are coming through rather loud at the beginning and end of the recording.]

April is the cruelest month, and I am currently treading water in a sea of ungraded essays. That’s the backdrop for why I am so thrilled to announce that my book, Cognition, Mindreading, and Shakespeare’s Characters, will be published in 2019 as part of Palgrave Macmillan’s Cognitive Studies in Literature and Performance Series! Thanks so much to everyone who has helped this project come to fruition, in particular my mentor Sharon O’Dair and everyone with the Hudson Strode Program in Renaissance Studies at the University of Alabama.

Thanks as well to Steve Burch, Tricia McElroy, Jen Drouin Perso, and Chase Wrenn for reading drafts and providing feedback, to Michelle Dowd for continued Hudson Strode Program in Renaissance Studies support, to Kate Matheny for editing, and to Alissa Helms for supporting me, keeping me sane, and treading the waters of academia hand in hand with me! And to everyone else who has helped me along the path: social media doesn’t have enough space for me to thank everyone individually, so you’ll all have to settle for a hug in person.

We’re still looking for another reader or two for Meredith Noseworthy‘s What Vicious Loves! We’ll be holding an open rehearsal on Sunday evening at 7:30pm in Gorgas 205 if anyone’s interested in seeing how the play is progressing and getting at glimpse at IF’s process. Please RSVP to nrhelms@ua.edu if you’re interested in attending.

Our performance of What Vicious Loves will be on April 2nd in Gorgas 205. Our reading is very much a work in progress, and we want to give it the time it needs to shine.

An outspoken tyrant besieges himself behind family, lobbyists, yes-men, and a misinformed bastard; a seasoned autocrat, pocketed by a foreign diplomat, stokes his ego with unnecessary bloodshed; and a peace-seeking populus is stifled, unnamed, underwritten, and soon forgotten. Lies, scandal, corruption, and intrigue. This isn’t American politics. This is King John.

But political commentary was not my intent when I originally set out to direct this play; its timeliness is merely an irony. No, I picked the play because it provides an unique insight into Shakespeare’s process. Written in the mid-1590s, the history introduces, tests, and tinkers with several plot threads that emerge, matured, in his later tragedies. As such, these fledgling moments often push in directions contrary to their more memorable counterparts. In Act IV, for example, a prophet predicts the exact hour and nature of John’s death; however, unlike Macbeth, John quickly accepts his fate and withdraws to meet it. In Act III, John attempts to neutralize Arthur by blinding him, but unlike Cornwall in King Lear, Hubert empathizes with the boy and ultimately frees him, unharmed. And like the inciting incident in Hamlet, John dies, poisoned, in his orchard; unlike King Hamlet’s death though, no one pursues the treasonous murderer. Instead, Henry and the Bastard mobilize England to defend against Louis and France, claiming that England will never fall to invaders. Again, the play isn’t perfect, but it’s entertaining, and it deserves to be performed.

Improbable Fictions will read King John at the Dinah Washington Cultural Arts Center on November 17th at 7:30PM. Admission is free and open to the public; doors open at 6:30PM, and re show music starts at 7:00PM.

Or to be more accurate, Bechdellian/Wallacian Shakespeare. On September 15th, IF will present a selection of Shakespearean scenes focused on women alongside a town hall discussion of women in Shakespeare. Right now we’re casting for those scenes (which, as per our usual, will be delivered on-book). If you’re interested in being involved, message me on facebook (https://www.facebook.com/groups/313455652125964/) or email me at nrhelms@ua.edu.

Just a brief note about everything IF will be doing this spring:

We hope to see you at one of our many events!

Theatre people always say that Macbeth is the unluckiest of plays, particularly for actors who literally risk “breaking a leg” should they bid each other “good luck” before a performance. Such a hapless reputation, however, has not taken away from the immense popularity of the Scottish play. With Romeo and Juliet, Juliet Caesar, and A Midsummer Night’s Dream, Macbeth has long been a staple of American high school education. The Scottish play often serves as our introduction to Shakespeare, if not to theatre more broadly.

One reason is because of its brevity. At merely 2,000 lines long, Macbeth is approximately half the size of Hamlet. Macbeth speaks almost 30% of those lines, thus making him more central to his play than any other Shakespearean protagonist, except Hamlet who speaks about 38% of the lines in his play. Since we spend so much time with Macbeth—by comparison, Lady Macbeth essentially exits the play in 3.4, only to return briefly in 5.1—audiences and readers at times find themselves identifying with him. Bloody career aside, Macbeth’s intense human desire to see his ambitions realized—no matter the cost—can become very personal for us.

Macbeth was first published in the Folio (1613), the collection of Shakespeare’s plays published seven years after his death. It most likely was written near the end of 1606, and it is often identified as the last of the so-called “great tragedies” of Shakespeare (Hamlet, King Lear, and Othello). As is so common in Shakespeare, the playwright borrows his narrative from another source. In this case, Shakespeare turns to the famous Chronicles (1577) of Holinshed, a popular history of England, Scotland, and Ireland familiar to the playwright and his contemporaries. Chronicles tells the story of Lady Macbeth, a high noble woman and cousin to King Duncan, whose husband and son are murdered. Macbeth marries her, and becomes king after Duncan dies in battle. As in the play, Macbeth never fathers a child.

Shakespeare significantly alters this history, and in the process provides us with fast-paced action and tragic characters. To be sure, Macbeth is a dark and bloody play. Probably the most famous and controversial (and there are many) adaptation of the play is Roman Polanski’s 1971 film, produced in the aftermath of the murder of his pregnant wife Sharon Tate by members of the Manson Family. As you will see with Scotland, PA, the play does not always inspire gloomy productions, but it is simultaneously unsettling and compelling. It forces us to realize, with Macbeth, that “Life’s but a walking shadow, a poor player, / That struts and frets his hour upon the stage, / And then is heard no more.”

Scotland, PA irreverently repackages Shakespeare’s Macbeth into a 70’s style mystery, and like all good satire, this one is based on disgust.

Writer-director Billy Morrissette began drafting his script while forced to read Macbeth in high school and flip burgers at Dairy Queen. Of his employment, Morrissette disingenuously states, “I hated my boss, and I wanted to kill him.” Hence, while Shakespeare’s play is about murdering the king of Scotland so Macbeth can take his place, the movie is about murdering the owner of a burger joint so Mac can become owner. The movie also is about the fast-food style bloodbath that follows.

Joe “Mac” McBeth (James LeGros) and Pat McBeth (Maura Tierney) are unhappy with their life working at Duncan’s, a burger stand operated by Norm “The King of Burgers” Duncan (James Rebhorn). After Mac is passed over for promotion, the McBeths elect to take things into their own hands and make true the prophecies of one fortune teller (Amy Smart) and two stoned hippies (Tim Levitch and Andy Dick). Scotland, PA faithfully follows in the tradition of Macbeth being Shakespeare’s bloodiest drama, as a gruesome murder brings the amiable scatterbrained Lt. Ernie McDuff (Christopher Walken) to investigate.

Anyone familiar with Macbeth will enjoy, even if superficially, the parallels Morrissette creatively imbues into his movie, such as Pat’s grease-stained hands. Yet despite the comedy, Scotland, PA maintains much of what makes Macbeth memorable. For instance, LeGros’s Mac resembles a feckless Macbeth easily led by his wife, and Tierney’s Pat recalls traditional performances of Lady Macbeth when she challenges her husband’s manhood. Further, this fast-food themed appropriation uses food and hunger not only for laughs, as when viewers see Christopher Walken with a carrot hanging out of his mouth, but also recalls its Shakespearean original. With approximately 30 references to consumption, Macbeth is chock-full of food-related imagery, whether Macbeth’s metaphorical hunger for ambition or the physical hunger noted by the witches. Even one of the most famous lines from the Scottish play—Lady Macbeth’s lamenting that her husband is “too full o’ th’ milk of human kindness”—suggests a dramatic concern with nourishment. The film’s fantastic soundtrack, composed almost entirely of Bad Company songs, also makes telling connections between play and film. “Bad Company” playing as Mac first approaches the stoned hippies (i.e., witches) is a hard rock caution, and “Can’t Get Enough” sums up the ethos of both Mac and Macbeth.

Morrissette happily dedicated Scotland, PA to all the burger flipping students who, like himself, read Cliff Notes instead of Shakespeare. If you are one of those people, then bon appetite!