There’s an abundance of Shakespeare in Tuscaloosa this fall! Here are some of the offerings. 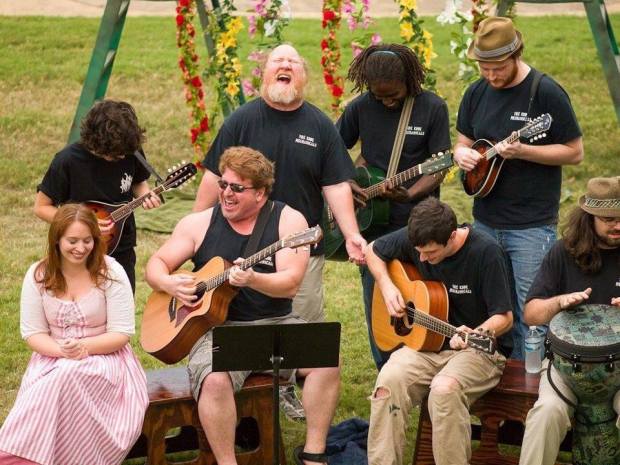 This fall, Improbable Fictions will be hosting a series of one-hour workshops on Shakespeare in performance. Our first event will be this coming Thursday, September 11th at 7:30, when Mark Hughes Cobb will lead a workshop entitled “Rude Shakespeare: Much Ado About Nothing and Outdoor Performance.” Mark will discuss the history of the Rude Mechanicals, a Tuscaloosa Shakespeare troupe, and will break down key skills actors and directors use when preparing Shakespeare’s plays for a contemporary outdoor setting. Audience participation will be encouraged.

All workshops will be held downtown at the Paul R. Jones Art Gallery, 2308 6th Street, Tuscaloosa at 7:30pm each evening. These events are free and open to the public, and are sponsored by the Hudson Strode Program in Renaissance Studies at the University of Alabama.

This year the Hudson Strode Program in Renaissance Studies begins a Shakespeare on Film series at the Bama Theatre in downtown Tuscaloosa. All films are free and open to the public. We’ve scheduled a range of films, some you’ve no doubt seen and loved, others you’ve not. We offer a teen Taming in Ten Things About You, which stars Julia Stiles, Heath Ledger, and Joseph Gordon-Leavitt and we offer an African American Taming in Deliver Us From Eva! We offer the unnerving noir of The Bad Sleep Well, in which a young Japanese executive tracks down his father’s killer; we balance that Hamlet with To Be or Not to Be, a serious comedy starring Jack Benny and Carole Lombard, shot during World War II. We offer song and dance in West Side Story and Love’s Labor’s Lost. We offer Robby the Robot and film’s first $1,000,000 budget in Forbidden Planet. Inspiration is offered for a lot less; in Shakespeare Behind Bars, one can appreciate the efforts of theater professionals working with inmates as they try to change their lives. Please enjoy for the first time or again!

Here is the line-up:

All films start at 7:30pm, and are free and open to the public.

Improbable Fictions will present two staged readings this semester: Richard III on Wed, Oct 1st, directed by Nic Helms, and As You Like It on Thurs. Dec 4th, directed by Deborah Parker.  Both staged readings will be held in the Dinah Washington black box theatre at the Tuscaloosa Cultural Arts Center. Shows start at 7:30pm, with pre-show music at 7:00pm. Free and open to the public.

The University of Alabama’s Department of Theatre and Dance presents Shakespeare’s Twelfth Night, adapted and directed by Seth Panitch, from November 18-23. The play is set in 1920s New Orleans, and will involve elements of jazz and voodoo. Tickets can be purchased online or at UATD’s box office on campus.