Staging Hamlet for Improbable Fictions posed a problem: how do you depict the ghost of Hamlet’s father?  Special effects often fall flat at this moment: various combinations of white sheets, eerie green lights, and zombie makeup.  And certainly, the special effects budget of an IF production totals about $0.00.  I trust our audiences to have a lot of imagination: our actors carry their scripts around onstage, after all, and it’s improbable (if not impossible) for an audience member to forget that theatricality unless they let themselves become invested in the show.  Even so, King Hamlet’s ghost needs to be a bit terrifying, and while I could have asked our Ghost (Steve Burch) to simply step onstage and “play dead,” letting the audience imagine the rest, terror needs to be more visceral.  The supernatural demands to walk the stage. 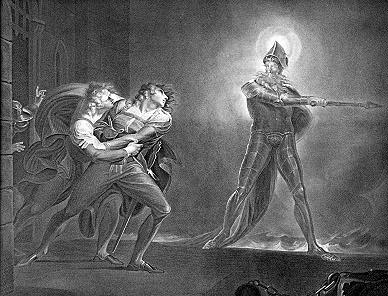 With that in mind, I set out to hack the opening act of Hamlet to bits.  Marcellus and Bernardo disappear from the text.  Instead, the play opens with the meeting of Hamlet (David Bolus) and Horatio (Amber Gibson).  Hamlet soon asks Horatio for a speech:  “We’ll have a speech straight: come, give us a taste of your quality; come, a passionate speech” (a line taken from Hamlet’s later dialogue to the First Player).  Hamlet leads Horatio over to a tape recorder; Horatio tentatively begins the “To be or not to be” soliloquy from the 1st Quarto of Hamlet (known as the “bad quarto”).   When Horatio’s memory falters, Hamlet picks up the train of thought as a dialogue:

Hamlet stops the recording, and Claudius strides onstage with his opening monologue.

In a later scene, Hamlet decides to listen to the recording.  However, the supernatural decides to step in.  The audio track below is what Hamlet hears from the tape recorder (sound design courtesy of the fantastic Jerrell Bowden).  During the performance, Hamlet cradled the tape recorder and carried it into the center aisle of Farrah Hall 214: the Ghost’s voice quite literally walked amidst the audience.

Since we didn’t get Hamlet’s responses on tape, I’ve included a portion of the script below.  You’ll probably want to open the audio file in a new tab.