Improbable Fictions will be performing Shakespearean Scenes at the 2016 Kentuck Festival of the Arts’ Spoken Word Tent on Oct 15-16. If you’re interested, chime in! We’re still in the early planning stages. You can contact me at nrhelms@ua.edu. 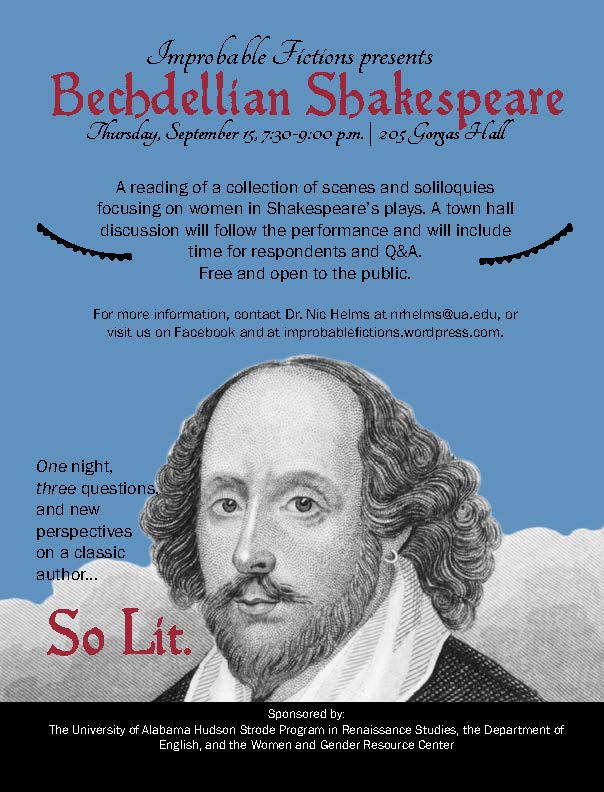 The test can begin to tell us whether or not women have active roles in that fictional world.

Shakespeare’s plays seldom pass this test. After all, he wrote plays during the English Renaissance, a time when women were forbidden to act. That meant that boys and young men would dress as women to play the women’s roles. Perhaps Shakespeare couldn’t create many female characters because he couldn’t find enough skilled actors to play the parts.

Even so, today we’re left with a body of Shakespeare’s works where women have far fewer voices than men. Can those voices still speak for women’s experiences over four hundred years after they were written? And how can we, as actors, audiences, and readers, make sure that the Cleopatras, Desdemonas, and Margarets are not drowned out by the Octavians, Othellos, and Richards?

Please note, while tonight’s scenes stage only one moment of physical violence — Cleopatra’s suicide — they do contain verbal abuse, descriptions of rape, and accounts of murder and trauma. Shakespeare’s stories depict a wide range of women’s experiences in the Renaissance, and much of that involves violence in all its forms.

Portia and Nerissa are kicking back, having a cool beverage — metaphorically —  after having gone through elaborate disguise, trickery and insightful wit to bring justice, or perhaps mercy, its kinder cousin, to Venice. Though a good bit of what comes before and after in Merchant is about love and bonds, at this point the friends take a moment to notice the little things, to feel how context can clarify or obscure, and revel in the feeling of grateful relief that comes at the completion of an arduous task. Bonus: Listen for a line Willy Wonka paraphrased.

In this stellar, much-quoted monologue from a show rich with those, Portia, in disguise as a male legal scholar, has found her strength in being able to speak from behind a mask. It’s not that being in drag made her stronger, but that being a male in the 16th century meant being freer to speak truth to power. Here she connects god to duke to Shylock, to establish the lines that can connect them all. She’s giving Shylock an out, a chance to back off his demand for a pound of flesh, before lowering the justice boom on him.

Shakespeare predicted “Oh no she di-ent!” 400 years ago, and one of his sharpest-tongued practitioners is Rosalind, with a fire and wit like Beatrice’s, brought out when in guise as Ganymede. Here she’s met with the rustic Phebe, who is being pursued by the equally sheepish Silvio, who longs for Phebe, who has instead cast her eyes on this new dude Ganymede. Where Viola, being lusted after as Cesario, pushes Olivia to reconsider the worthiness of her suitor Orsino, the rougher Rosalind rebukes Phebe, urging her to settle for Silvio.

Old Queen Margaret, the Duchess of York, and Queen Elizabeth lament the deaths of husbands, brothers, and sons from the hand of newly crowned King Richard and Elizabeth learns to her horror Richard’s next victim in her family is to be her daughter. While these women all have names and have lengthy scenes and talk about power and survival, the fact is they all focus on the King and his evil plans. Bechdellian? Perhaps.

This is the final scene of Antony and Cleopatra. They have been defeated by a very young Octavian. Antony has already killed himself, and in this scene Cleopatra meticulously stages her own suicide. It is important to keep in mind this is still the Roman Republic – Octavian is not yet the Emperor Augustus. The only royalty in the play is Cleopatra. What is interesting about this final scene is the contrast between Cleopatra, the Queen of Egypt, in her dealings with Octavian and what is revealed when she speaks about Antony.

Just before this scene, the jealous Othello has made his decision to murder his wife Desdemona, suspecting her of infidelity. Desdemona has intuitions about her coming death, and she and her maid Emilia discuss Othello’s erratic, abusive behavior and the unequal standards society places on men and women’s sexuality. While this scene clearly fails the third step of the Bechdel-Wallace test (the conversation must be about something other than a man), what we see here are two close friends struggling to navigate a world perilous to women.

Tamora, conquered Queen of the Goths, and Lavinia, her archenemy’s daughter, meet in an isolated and dark forest.  While her sons look on, Tamora seeks revenge on Lavinia’s family for the humiliation she suffered at the hand of Lavinia’s father, Titus Andronicus.  Ultimately, Tamora’s sons enact her revenge by raping and mutilating Lavinia.  While no physical violence occurs onstage in our scene, the language is some of the most graphically violent in Shakespeare’s works. Two named women engage in a power struggle using the weapons they know best: unadulterated violence and womanly virtue.  While the topic of their conversation is not a man, men’s actions have propelled them toward this life-or-death moment of confrontation.  Men weave through the action of this scene silently and seamlessly – does it pass the test?